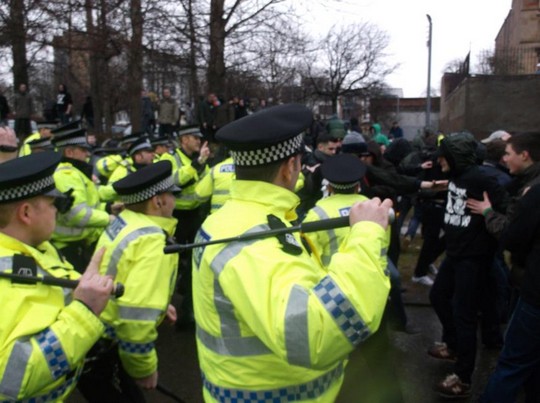 Surrounded by 200 police officers – around one for every marcher there – almost 20 riot vans, a line of police horses, a helicopter and 13 arrests, this was the scene at a peaceful support march in Glasgow city centre in 2013.

Stunned witnesses reported watching women and children being struck with police batons simply for standing in the wrong place. The march was organised by the Green Brigade, whose members claim they have been victims of police harassment and intimidation as a result of Scottish government legislation they say criminalises football fans.

Marchers began assembling outside the Chrystal Bell pub in the Gallowgate and several police vans were quickly on the scene. Men, women and children assembled, chanting “Celtic fans against the bill” as they set off to their destination at Celtic Park for the afternoon game against Aberdeen.

The procession marched up Watson Street and onto Bell Street, where it was then blocked by a line of police officers with support from a line of vans.  There had been no visible signs of any violent conduct from any marcher, no disruption to public order, but marchers were told if they took a step further, they would be arrested. 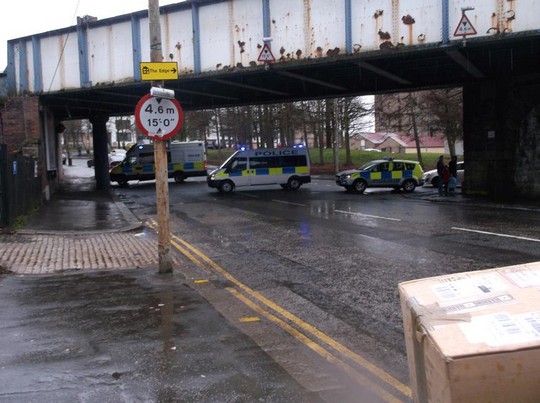 One legal observer and advocate for civil rights – people who observe protest marches and assist anyone in need of legal representation – who wished to remain anonymous, told me: “I had heard there was going to be a protest in the city by another organisation but it didn’t happen, so I came over to have a look here instead.

“This was extreme,” she continued. “I’ve never seen anything like that. I have never seen batons used on kids before, and I witnessed the Piccadilly and London riots. I’ve seen violent demonstrations, this was not that, they weren’t even throwing anything, nothing.”

Scuffles between marchers and police happened throughout Bell Street as marchers tried to move forward. Police threw marchers back into the crowd – some clearly young boys – one disabled child in a wheelchair was almost knocked over by the police line. 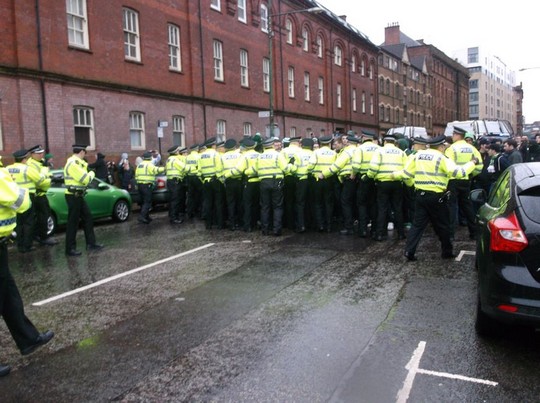 “After the march started the police just cornered them and the vans kettled them. The marchers then tried to break through and the police got the batons out. I was elbowed into a car by the police as I tried to take photographs, they were just grabbing and pushing people.

“I managed to get the name of one 14-year-old boy as he was arrested and had his head down in a puddle. I think they were taking advantage because those marchers weren’t political protestors, they don’t know their rights.

“The police kettled them in under a bridge, it was just totally disproportionate. There was no public around that area to be disrupted and it was just outside of public view.”

As the marchers were surrounded by police, reports were filtering through the crowds of several arrests being made. Marchers were told if they attempted to leave they would be arrested. Around eight police vans sat at the Bell Street side of the kettled marchers, with at least another eight gathered on the Gallowgate and several police cars scattered around the area. Police officers on horses then arrived to provide another reminder to marchers that they should not attempt to move. The police helicopter had been circling in the sky from the moment marchers began gathering. 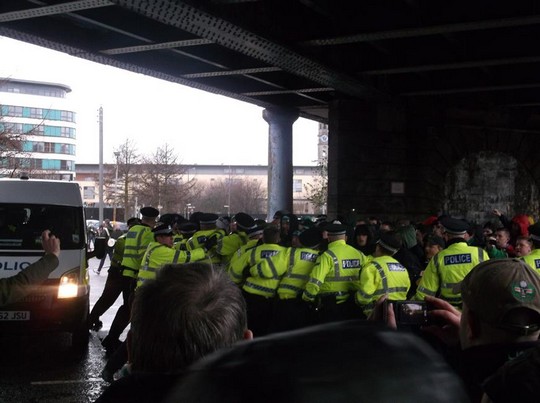 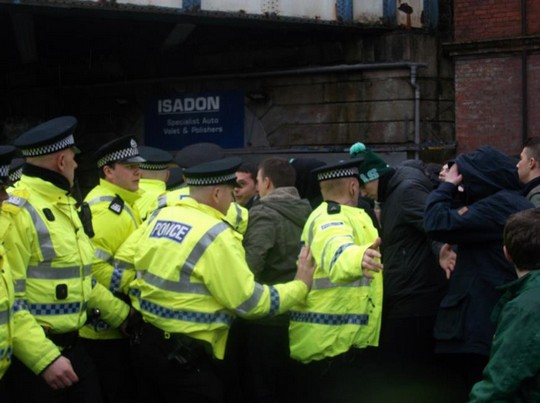 I asked several of the police officers surrounding myself and the other marchers – estimates said around 200 marchers attended, indicating for every one marcher there was a police officer – under what legislation the marchers were being held.

“They didn’t apply to march,” one told me. “They have to make an application to Glasgow City Council. We’re here to prevent disruption. We’re here for public order.”

When I asked what indication the police had been given that this might be anything other than a peaceful march, he shrugged. None of the officers I spoke to named any legislation or indicated what had happened to necessitate such a heavy police presence. “We were just told to come here,” another said, “I don’t know any more than that.”

While boxed in with the marchers, I witnessed no crowd violence. I saw a policeman pick one boy out and order him to remove his scarf from covering any of his face or he would be arrested. The boy did as he was told. As we waited to find out what the police planned to do with us, we could see marchers who had either tried to escape from the kettle or been in the surrounding area being arrested. I heard one report of a police officer being hit by a bottle but could not confirm it. 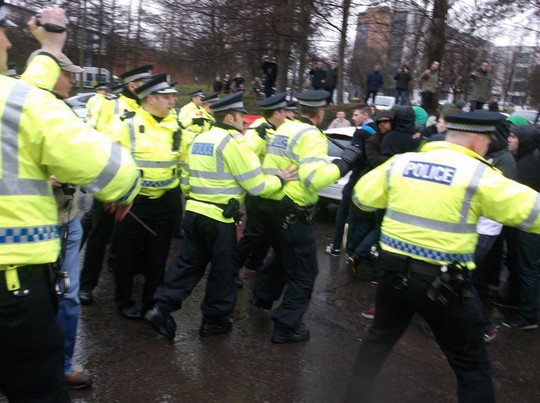 The police began allowing the marchers to leave in groups of two or three at certain intervals and from different parts of the group. As I described the scenes to a colleague on the phone, he asked me if I had my press card with me – as I responded and said the words “press card” out loud, the police immediately escorted me outside of the kettled group and told me I couldn’t stand around.

I had no choice but to watch from afar as the rest of the group was dispersed. In total, the marchers managed to make it just yards away from where they had begun assembling at 12.30pm. As I left to find somewhere to write up my notes, I spoke to two men near the Chrystal Bell pub, the marchers’ meeting point, who had also witnessed the police using batons on marchers. 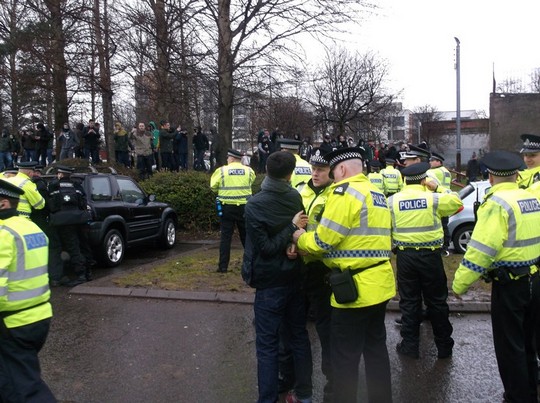 A spokeswoman for Strathclyde police said: “At around 1pm, police were called to reports of a large number of people gathering outside the Chrystal Bell pub at Gallowgate, Glasgow. The crowd, many of whom were wearing similar hooded tops and using scarfs to hide their identities, appeared to be attempting to stage an illegal street procession and officers were deployed to prevent this.

“The crowd were instructed that any procession on the road was illegal but that officers would facilitate a safe and orderly procession on the pavements toward their intended destination at Celtic Park. However, this was ignored and more officers were deployed as the crowd became increasingly confrontational and aggressive. The situation was contained a short time later.

“In connection with the police operation at Gallowgate, Glasgow this afternoon, 13 people have been arrested so far in connection with alleged public order offences, and they are currently being processed.  Police enquiries are continuing into the incident and officers will be studying CCTV and helicopter footage to gather further information.”