Members of nine biggest Croatian ultra groups  have gathered in a press conference, demanding that the new „Anti-hooligan law“ is made unprofesionally and not in coordination with ultras themselves, as first promised by the goverment. The Croatian ultras claim that the goverment has cheated on them, and that the human rights of ultras are endangered with new law (in fact it is the third change of same law since year 2003.).
Members of nine biggest Croatian ultra groups (Armada, Bad Blue Boys, Demoni, Funcuti, Kohorta, Torcida, Tornado, White Stones) have gathered in a press conference, demanding that the new „Anti-hooligan law“ is made unprofesionally and not in coordination with ultras themselves, as first promised by the goverment.
„We are not in war with the goverment, however, if the new law passes in our parlament, we are ready to press charges against our goverment on Croatian High court, and furthermore, we are ready to go to Strasbourg's Court for human rights, and seek justice there.“, said Thomas Bauer, the coordinator for Croatian ultra groups. The ultras have also noticed that they held three meetings with the Goverment vice president Đurđa Adlešić's cabinet members, and one with her in person, as well as many meetings with members of Ministry of justice and the police, presenting them with their vision how the new law would look and be made the best for all. But no response came from the goverment, and the law has been passed onto voting into parlament, despite promises made to the ultra groups. Some of the new measures include taking passports away before international matches, and banning orders, which can be given by police without strict evidence of one's guilt.Curenntly 107 ultras have the banning order without even seeing the judge, and there is no indications that they'll see one before the expiration of the legal limit for court to meet and start the actuall process. Also,some of the new measures include ban of face-masking, ban of entering the stadium after only one beer, and, ironically, that same beer and other alcohols is served in  VIP sections of all stadiums. 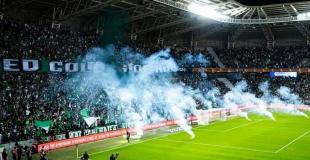