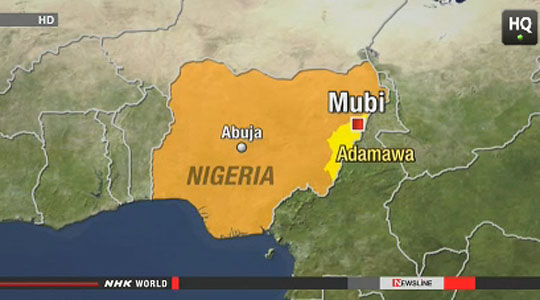 An explosion on Sunday at a football field in northeastern Nigeria has killed at least 40 people.

Local police believe the attack was carried out by Islamic extremist group Boko Haram, which earlier claimed responsibility for kidnapping over 200 schoolgirls in Nigeria's northeastern state of Borno in April.

The AFP news agency says the bombing occurred at a football field in the town of Mubi in Adamawa state. The victims were mainly residents who were watching a local football match.

One eyewitness says a bomb detonated just as spectators were heading for the exit after the match.

No one has claimed responsibility for the attack.

As for the site of the attack, some reports say it was a television viewing area for football fans. One report says it was a bar where a large number of people were watching the match on TV.

The explosion comes as Boko Haram has launched a series of bombings and other attacks in the country. More than 2,000 civilians have died in the attacks this year alone.