Panathinaikos got punished after riot.

After final whistle in the match Panathinaikos - Olympiakos Volos 18.12.2010. Supporters of Panathinaikos invaded the pitch, chased their own players into the locker room and threw projectiles at them. They also attacked the VIP section. All this in anger after losing 1-0 against Volos.

Before the game Gate 13 showed a banner: "We are jobless and you wallow in luxury. Respect (the team symbols), patience is running thin."

Its not this single result it self that caused the anger. It was more like an outburst because of many things. Players acted like it was "fun time", team played like they were from second division and lack of patience. 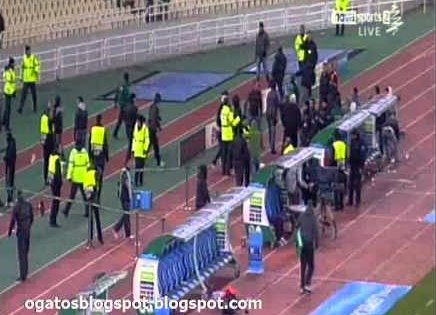