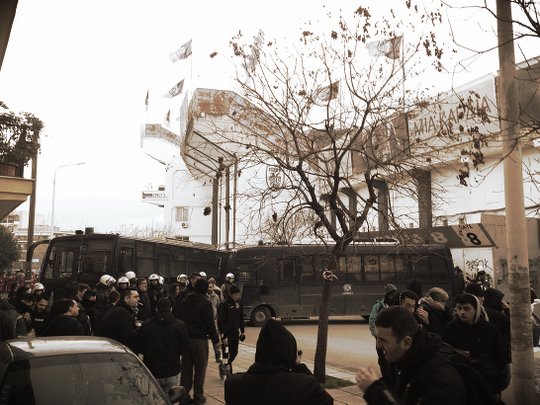 A group of lads from International Groundhopping Crew visited the Greek city Thessaloníki. They attended PAOK vs. Aris (basketball) and PAOK vs. Olympiakos (football). They also visited the football stadium of Iraklis and Aris.

Here is their story from the weekend:

On Friday the 6th of February 2015, all of us met in London and went together to Gatwick Airport waiting for the flight to Thessaloniki in the early Saturday morning. With the help of a few cans the night passed really fast and we were ready for the trip! We dropped our luggage off in the hostel and went to a pub to see the game between Arsenal and Tottenham. We had to leave after around 70 minutes because the basketball derby was about to start. 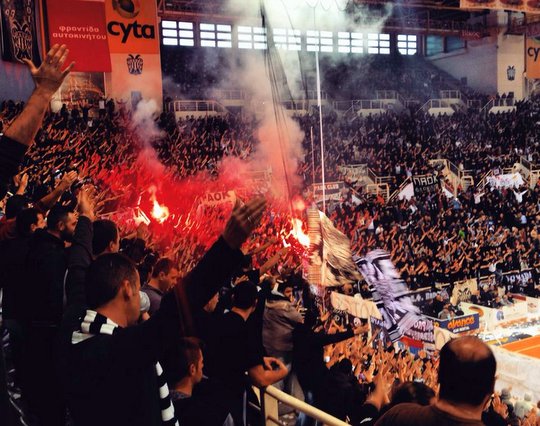 We took a taxi to the arena which is located quite far out of the city centre. The ticket staff didn’t really know how to print our pre-ordered tickets but eventually we got the tickets and came into the arena right when the game started.

The arena was nearly sold out and the fans seemed to be motivated. With the noise getting reflected from the roof, it got really loud.

PAOK started very well and was leading in the first quarter. Aris on the other hand had a nervous start, but it is understandable with that noise. Furthermore, the fans often fired off bangers when Aris was attacking to distract the players. In the second and third quarter Aris started to play better and took the lead. Not only the result changed though, also the atmosphere got a bit worse since many fans seemed to be frustrated.

During the last part of the game, Aris took it a bit too easy, allowing PAOK to get close again. The fans got louder again and kept singing until the last minute, but when Aris was 8 points up one minute before the end, many fans took their flags off the fence and left. They missed a very interesting end though, because PAOK only lost by one point!

On Sunday we got up quite early to do some sightseeing in the city. We can just say that Thessaloniki is a very nice city and recommend everyone to go there. It is not the most modern place, but most surely very atmospheric.

Later we went to the Iraklis, PAOK and Aris stadium to take some pictures of the grounds and the surrounding street art. Unfortunately the Aris game which supposed to take place on that day at 13:00 was moved to Monday so we missed that. The club board still let us into the stadium and we were able to observe their final training session. On this occasion we all want to thank Aris very much for their hospitality! 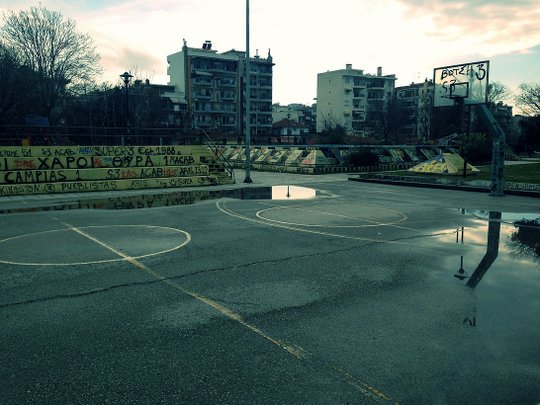 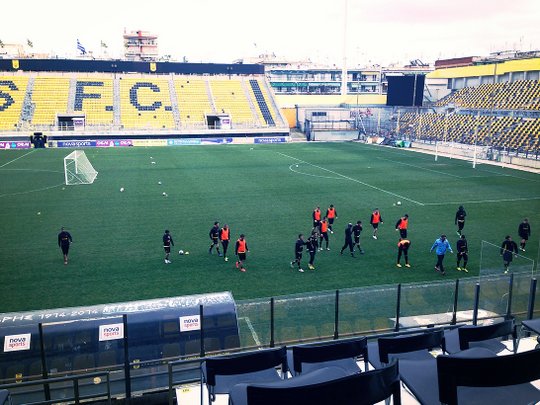 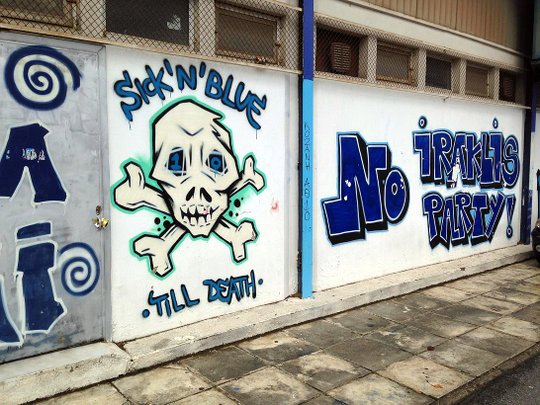 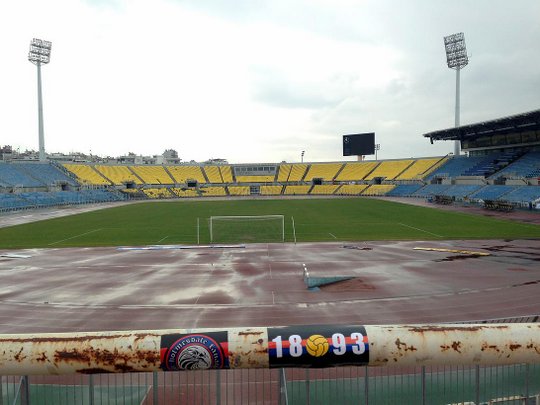 Before the game there was a massive police presence explaining why the Aris game got moved. There were no away fans allowed for this game, so the huge police presence was even more impressive.

PAOK fans tried to attack the Olympiakos team bus which caused a fight with the police. At the end the police blocked the whole square in front of the stadium and tear gassed the whole area. We decided to go to the club shop to get away from the tear gas like many other fans did. Eventually the air got a bit better and we went into the ground around one hour before kick-off.

The stadium was already quite full at that point and Gate 4 started early with singing, a very impressive atmosphere before the game. When the Olympiakos players tried to warm up, a few fans on the long side welcomed them with some flares, literally a very warm welcome.

When the players came out, the PAOK fans created a massive pyroshow over the whole stand! Once the game started the atmosphere was suddenly not that good anymore. We were all a bit surprised that before the game the whole stand was screaming but as soon as the game started only a smaller section was singing. There might be many reasons for that, like the cold weather, the bad results PAOK recently delivered or just the fact that this game was very boring and not intense at all.

Anyway, the atmosphere was still better than in most of the other football stadiums. Flares and smoke bombs were used nearly non-stop and Gate 4 was covered in black and white flags for a while which looked very good!

In the second half the game was interrupted for a while because an Olympiakos player refused to go to the corner flag again after PAOK Fans threw everything they found in his direction. The player kicked the ball on the stands which made the fans even angrier and also pissed of the home players resulting in wild discussions on the pitch. Unfortunately I can’t tell you about any highlights on the pitch because they simple don’t exist. 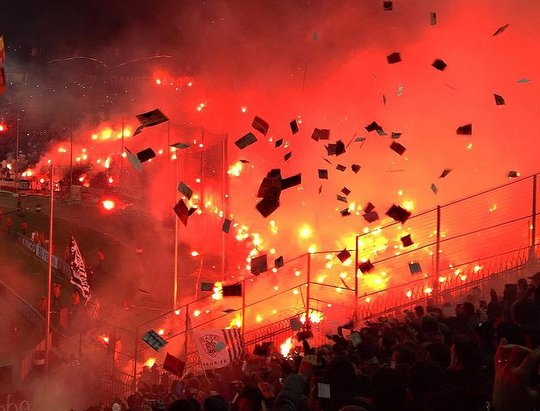 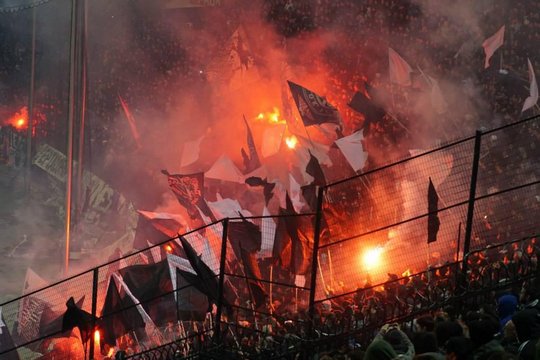 Thanks to the International Groundhopping Crew for this match report!