Derby of Copenhagen, match between the two biggest clubs in Denmark.

I arrived early Sunday morning in Copenhagen. Met my contact and friend "Bad2TheBone" (known from our forum) who is supporter of Brøndby.
We went to Rosie McGee's, a really great pub located close to Copenhagen Central Station (Hovedbanegården). Brøndby-supporters had planned a big corteo outside this pub and up to Parken, Stadium of FC København. Right before I arrived there had been a fair-fight 20 vs 20 at another place.

Got some pints and met "B2TB`s" mates. Outside a big number of supporters waited on the corteo to begin while lighting some pyro and drink. Big number of cops were also ready.

After a few beers we was ready for the corteo. Everybody stood outside, around thousands masks, similar as used in the movie Vendetta was given out. In short, this movie is about fighting for the freedom, and in the case with Brøndby they used it as "freedom for fans". Flags were set up together with a banner in front of the crowd. On most flags they had the "V"-logo from the movie, and on the banner it stood "V for Vestegnen".Vestegnen is "Brøndby`s place in Copenhagen", so in short it meant something as freedom for Brøndby supporters.

We took on our masks, while the cops stood in front and on the sides, screaming in megaphones that hiding your face might resulted in arrest`s. Pyro was lighted and we stared the walk. Really great atmosphere with a few thousand Brøndby supporters. We walked at right side of a longer lake, a route the cops already had planned for us. At the other side of the lake FCK had their area.
For some reason cops had a really poor line in front of one bridge heading over the lake. We managed to run over this bridge and over at FCK`s area. Lot of cops met us there, and smaller incident started. Everything were thrown at the cops, while they answered with teargas and batons. We tried to run into another street, but cops surrounded us and got control on the situation. We headed back to the other side of the lake again.

Rest of the corteo was not very special. Few bottles, paint-bombs and other stuff was thrown at buildings and cops. We arrived Parken without meeting any FCK supporters.

Pictures from the corteo: 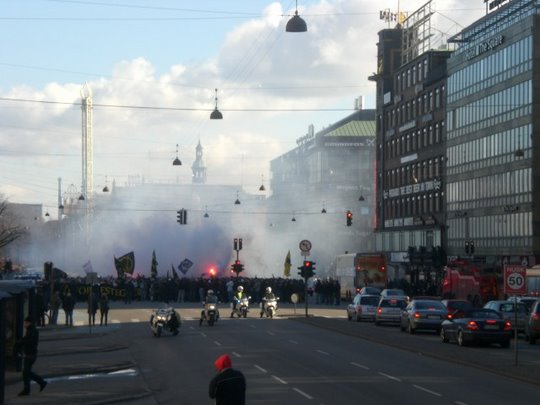 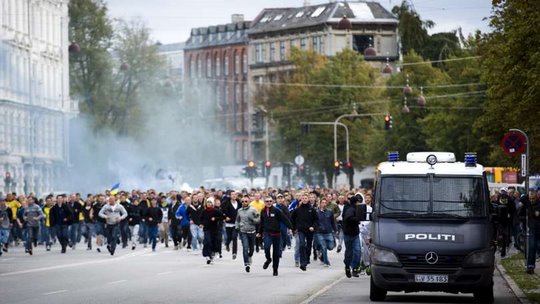 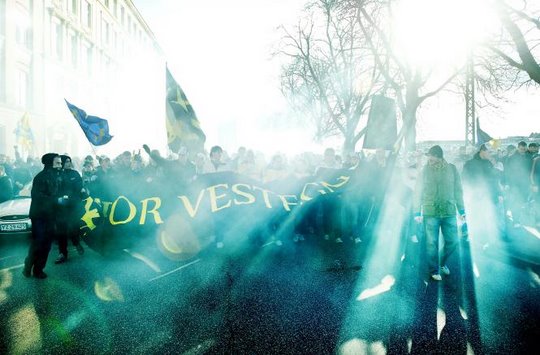 The match:
We was a few thousand at the away section, in total about 30 000 fans inside Parken. At kick off Brøndby had lot of flags and FCK had a choreo at the lower part of their long side with a banner "Its our city, so understand it!", also some Tifo at Urban Crew`s (Ultras of FCK) section, located at the short side.

Atmosphere from Brøndby was great in first half, some pyro were lighted as well. I was not very impressed by FCK. Urban Crew were very active, with jumping, arms and flags, but they were to few in their section to make big noise. Didn't hear much of their songs at all. On the long side there was thousands of FCK supporters standing (whole lower section!), but hardly any songs from this part.

One great chant was started by Urban Crew, their longside repeated it, then Brøndby answered "Hate FCK". Funny and load, from both groups.

Second half was started with a really great pyro-show from Brøndby, followed by lovely atmosphere. Unfortunately FCK got a goal after 70 minutes, and the atmosphere from Brøndby`s away section turned into more normal noise. In the last minute of the match FCK scored a second goal, and finally you could hear them sing loud. At the same time some seats in the away section was set on fire while we left the stadium. 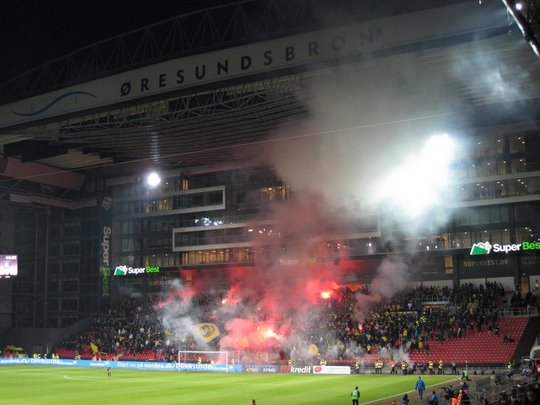 Short movie I took from the pyro:

Movie from the march and match:

After Match:
We went outside the stadium, police tried to get control on us, they wanted us to follow a route down to a train station to get away from the Stadium. At the beginning cops didn't have much control, it was very dark and we got "free", found a police car and tried to turn it over. Really close to succeed, but cops attacked us with batons.

We started to walk down the street to the train station. Every move to get in another direction was stopped by aggressive police. Somel clashes with the cops, but they answered with batons,  teargas, dogs and crazy driving with their cars to get us away. We had a really great mob in big number ready for everything, but big number of cops was also ready, so not much could be done there, and FCK didnt show up with anything. We got on the train and then back to our pub. Most lads went home, while a few of us took some finale pints before we left as well. Bit later on the night there was a clash between firms of both clubs.

In total over 30 supporters got arrested this day.

I really enjoyed this derby. Much action, before, during and after the match. Copenhagen is also a great city to get around in, relaxed and good atmosphere.

Thanks to "B2TB" and his mates for making this trip perfect!